How to Find The Right AR 15 Parts

The AR-15 is so popular across the United States that the “AR” may as well stand for America’s rifle. Derived from ArmaLite’s original military rifle, the AR is extremely versatile, operating in calibers from .22 Long Rifle to .50 Beowulf. This versatility makes the AR-15 suitable for a variety of uses, from self defense to hunting and more.

The beauty of this firearm is that with just a few accessories, you can quickly alter the rifle’s purpose. Picking the right components makes all the difference when you’re building an excellent AR-15 rifle. We’ll get into all the components that are a must have to build your dream AR-15, but first let’s get familiar with how the AR-15 became America’s rifle.

History of the AR

The letters “AR” come from the name of the gun’s original manufacturer, ArmaLite, Inc, though there is a common misconception that “AR” stands for “automatic rifle.” In the late 1950’s, ArmaLite developed the AR-15 as a military rifle, but was not met with immediate success. As a result, the company sold the design to Colt several years later. In 1963, Colt was selected by the US Military to manufacture a particular version of the automatic rifle, known as the M-16, which soon became standard issue for US troops.

With this newfound success, Colt took the opportunity to produce a semiautomatic version of the M-16 to market to the public, marketing it as the AR-15. When Colt’s patents for the AR-15 expired, many other manufacturers jumped on the chance to make similar models. Those manufacturers gave the weapons their own names, but the already well-known AR-15 became a generic term for all different types of AR-15-style rifles. Today, the National Rifle Association estimates there are close to eight million AR-15 variations in circulation.

What are the different parts?

While rifles can be customized to meet your specific needs, every fully-functional AR-15 is constructed from the same basic components. At the most basic level, the AR-15 is made of two main components: the upper receiver and the lower receiver, which are each made up of many parts. The first component of the upper receiver is the barrel, which builds velocity and accurately directs the projectile. The barrel stabilizes the bullet by applying a rotational spin by means of rifling. Muzzle compensators work with the propellant gases following the bullet out of the barrel to reduce muzzle rise and recoil.

The bolt carrier group contains the firing pin, bolt, cam pin, extractor, ejector and gas key, which work together to load, unload, and eject rounds. The gas system includes the gas block and gas tube. When a cartridge is fired, gas pressure is siphoned through the barrel’s gas port to the gas block, transferring hot gas back into the upper receiver. This gas drives the bolt carrier group rearward against the buffer, compressing the recoil spring, and the recoil spring decompresses and drives the bolt carrier group to load a new round into the chamber. A hand guard / rail system surrounds the barrel to support the shooter’s hand and prevent contact with the barrel and provide a platform to which accessories can be added to. 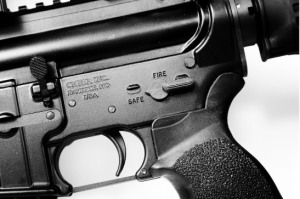 What are the most important parts?

While all parts of an AR-15 work together to make your rifle functional, some parts are more crucial than others. To ensure the best possible shooting experience, the barrel of your AR-15 may be the most important part of your upper receiver. The barrel plays a vital role in accuracy on the shooting range. These barrels cost a hundred to a couple hundred dollars on average, with many brands to consider, such as Rosco Manufacturing, Ballistic Advantage, or Faxon. Additionally, many consider the bolt carrier group to be the heart of the AR-15.

After all, this group is responsible for loading, firing,  unloading, and ejection of rounds. Considering the key role the bolt carrier group plays in the functioning of the rifle, it is surprisingly affordable, as cheap as $75 to a few hundred dollars!

Finally, a good hand guard or rail system can drastically improve the look and feel of your rifle. Aiding in comfortability by propping up your supporting hand, the hand guard allows you to firmly grip your weapon as you move around so that you can be sure to stay on target. The hand guard also protects you from the white hot heat of the barrel and the gas system underneath. A rail system will also give you the ability to mount accessories and other attachments to your rifle.

What are good accessories?

Though they are not necessary for the functioning of the rifle, many people choose to add accessories to their rifle so that it is perfectly crafted for their needs. Just because these accessories are not vital for functioning does not mean they cannot improve functioning! Here are just a handful of the many accessories available. 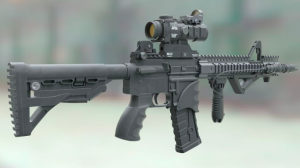 The silencer-optimized Raptor-SD™ features a ported shaft designed to redirect gasses down and forward, away from the shooter’s face when shooting suppressed. The unique design locks in place automatically, eliminating the need for a lever. Perfect for both left and right handed shooters, the handle is ambidextrous.

If you get a lot of use out of your AR-15,  iron sights are a must-have! You always want to have a functioning a sighting system so you can shoot with accuracy in case an optic were to fail. The RailScales LEAF DBAL-I2, for example, are designed to be extremely low profile and sturdy. If you use a PEQ-15 style laser,  they can be adjusted for windage and elevation, and include both a front sight post and a rear peep sight.

A stock assembly like the Bravo Company BCM Gunfighter SOPMOD Stock can make your stock all the more comfortable. Allowing for both length of pull and cheek-weld adjustment, this accessory ensures  that you have good contact with your weapon before firing rounds. The stock can attach to a standard rifle buffer tube, and is available in a variety of colors.

Accessories like these can upgrade a basic AR-15 model, improving both appearance and function. Remember there are hundreds of other accessories available to help you build your perfect AR-15!